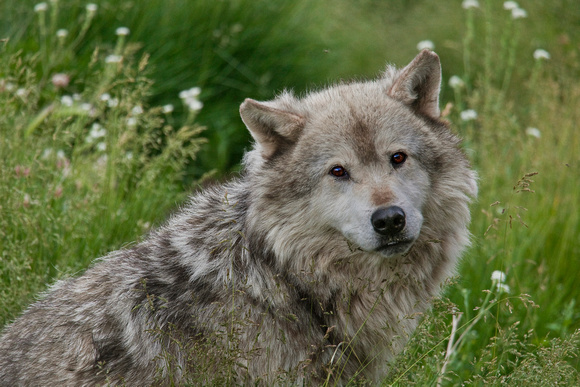 The gray wolf or grey wolf (Canis lupus), often known simply as the wolf, is the largest extant wild member of the Canidae family. Though once abundant over much of Eurasia, North Africa and North America, the gray wolf inhabits a reduced portion of its former range due to widespread destruction of its territory, human encroachment, and the resulting human-wolf encounters that sparked broad extirpation. Even so, the gray wolf is regarded as being of least concern for extinction by the International Union for Conservation of Nature, when the entire gray wolf population is considered as a whole. Today, wolves are protected in some areas, hunted for sport in others, or may be subject to population control or extermination as threats to livestock, people, and pets.
Gray wolves are social predators that live in nuclear families consisting of a mated pair which monopolises food and breeding rights, followed by their biological offspring and, occasionally, adopted subordinates. They primarily feed on ungulates, which they hunt by wearing them down in short chases. Gray wolves are typically apex predators throughout their range, with only humans and tigers posing significant threats to them.
DNA sequencing and genetic drift studies reaffirm that the gray wolf shares a common ancestry with the domestic dog. A number of other gray wolf subspecies have been identified, though the actual number of subspecies is still open to discussion.
© Paul Gill
User Agreement
Cancel
Continue