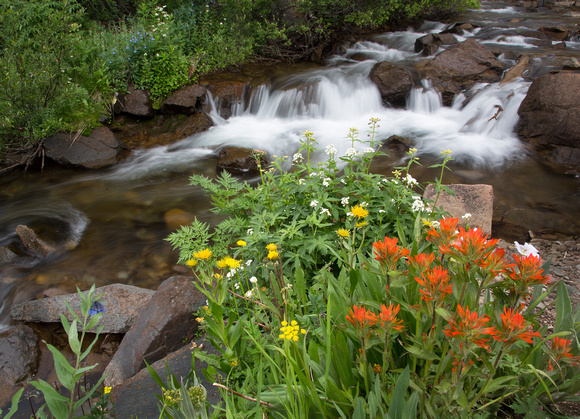 Yankee Boy Basin is an alpine basin in Ouray County, Colorado in the United States and is located in the Uncompahgre National Forest. It is well renowned for its display of wildflowers during the spring and for Twin Falls on Sneffels Creek.
Access is provided by a dirt four wheel drive road which branches off the Ouray County road that runs from Ouray to Camp Bird Mine. The road starts a quarter mile south of Ouray, passes a DOT site, and winds its way up the canyon.
Along the way are several primitive campgrounds that tend to be rarely visited. These encourage collecting dead-and-down firewood, though, which occasionally brings locals and people visiting other campgrounds. In general, though, the area is fairly private.
In the San Juan region of the Rocky Mountains, Yankee Boy Basin is a good place to see wildlife, including: deer, black bears, birds of prey and more.
Copyright © Paul Gill Photo
User Agreement
Cancel
Continue